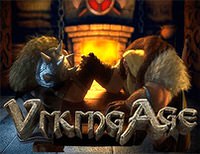 This game has a bonus feature game, which can be reached at certain levels. Bonuses can make a game exciting therefore it's a positive feature. This game also has a progressive feature, which allows you to participate in big jackpots with many players from around the world contributing to it.This game is a multiplayer game (sometimes called a community slot) is a game that is played by multiple people at the same time.

Hark back to the days when Vikings ruled the seas and plundered and pillaged playing BetSoft's Viking Age, which is a vibrant 3D game that has 5-reels and 30-paylines. Since the game is 3D the symbols pop off the screen and what is nice is that you can play Viking Age slot game for fun or for real money. You can wager between 2 cents and $75 on each spin and the maximum jackpot you can win is $3,750. There is no wild symbol, but there is a scatter symbol, a bonus game, and you can win free spins. You can be sure the 3D graphics are fantastic and player security in this BetSoft game cannot be beat. The sounds can be rather intense, but you can adjust the sounds including turning them off.

The symbols in Viking Age will stack and you can win a payout by spinning on just 2 symbols. There are 3 scatter symbols, which are the Viking Helm, an arm wrestling symbol, and Amma the Viking girl. Spinning on at least 3 of the Viking Helm symbols will trigger the Runestone Doors bonus feature where you will also need to spin the Amma symbol to trigger the a bonus round, get free spins, or win a payout.

Spinning on at least 3 of the Amma symbols will award you free spins and when you make free spins a couple of massive Vikings will award you more multiplier reels that will spin simultaneously with the other 5 reels to give you a multiplier. By spinning on 3 of the arm wrestling symbols you will trigger the simple to play bonus game where you only have to choose a coin flip between a couple of Vikings.