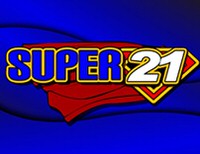 This game also has a progressive feature, which allows you to participate in big jackpots with many players from around the world contributing to it.

On the surface, the objective of the player in Super 21 is the same as it is in the "regular" versions on blackjack, in that you are interested in either getting closer to 21 than the dealer without busting, or holding out with your own hand without busting yourself.

This is an online blackjack game that can be played in single-deck mode, although there are also versions with eight decks, Whichever version you're playing, the player has his or her share of options. For example, you can double down on any two cards, and also double down after splitting Aces, which is something very unusual. There are also some things that don't turn out so glowingly for the player.

For instance, the dealer must hit soft 17, rather than standing on all 17's, as is the custom. Blackjack plays out at even money, which is a departure, because in other versions of blackjack it is going to pay at 3-to-2 odds. This is another side to that, however. A "diamond blackjack" hand will pay you at 2-to-1. This is a hand that contains an Ace of diamonds along with either a ten, Jack, Queen or King of diamonds. Also, any natural blackjack (consisting of two cards) on the part of the player will always beat the dealer, even if a tie happens.

If you get a "Five-card Charlie," which is a set of five cards that total less than 21, you will be paid at 2-to-1 odds. A player's hand consisting of six or more cards and still staying under 21 will pay off at even money regardless of what the result of the hand would be.

The surrender option is rather interesting. You can take advantage of the late surrender option, which is surrender after the dealer has checked the hole card, and insurance in the game pays 2-to-1. You can also engage in something called "double down rescue," which in effect is a way of calling surrender after you have already doubled down. That provides a way to save that is not customarily offered to the player.

You can bet anywhere from $1 to $250 per hand in this game (those table limits are in the upper left-hand side of the interface), but you're only going to be able to play one hand. As for betting money, it's not hard to figure out. All of the rules are also right in front of you to access with a click of the button. You can play for free until you get used to it, then you can play to win real money when you're ready. Have some fun with Super 21!