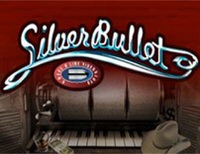 This online video slots game is a five reel; nine line game that as the name might suggest is based on the Wild, Wild West! The jackpot is a magnificent 10 000 coins that makes playing this game seem really worthwhile. Scatter symbols are included, as well as a wild icon, but that is all, Silver Bullet has no over the top extras to distract you. Lucky 7s and small bombs earn you good prize money, and the gun scatter symbol helps you win multiples of your wager.

With a 10 000 coin jackpot and a coin range of up to 5.00, you can win very large amounts without having to risk your entire bankroll. You will know when you have won as the sound accompanying a win is the traditional sound of falling coins. Drop the top prize with five beer barrels across an active pay line and you will be 10 000 coins richer. Look out for the wild icon, this is a Sheriffs badge, it can change all other icons except the scatter and help you out with a winning combination.

Open the Silver Bullet slots game in its own window to the sounds of honky-tonk music being played in a Wild West Saloon. The reels in this game spin at very high speed, and stop to the sound of a very funny sounding boing noise. The icons used in this game are reminiscent of what you would find in a Wild West saloon, whiskey bottles, beer barrels, horseshoes, pipes and the like. Silver Bullet, like many of the Playtech slots games is linked to the Dollar Ball Lottery, so pay a little extra on that to try to win some extra prize money. This video slots game is great to play, it is not overburdened with extras, is easy to understand and not in the least intimidating. Silver Bullet has all the essentials needed to enjoy the game, and with huge prize money on offer, it is certainly worth a spin.