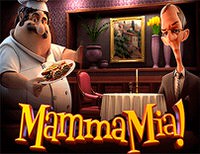 Mamma Mia is yet another great BetSoft slots game that has 5 reels and 30 paylines with an impressive maximum cash jackpot of $2,500. All the symbols in the game are animated and in Mamma Mia you will follow a world class chef making tasty dishes. Mamma Mia lets you play online video slots for fun or for real money and there are no lack of features in the game. You can wager between 2 cents and $150 on each spin and since BetSoft powers the game the graphics and sounds are fantastic and player security can't be beat.

One unique feature in Mamma Mia online slots is that you can lock the wild symbol to increase your chances at winning free spins. Some of the symbols in the game are a couple of snooty food critics and several mouth watering dishes. There is a wild and scatter symbol, you can win free spins, and there is a bonus game. You can lock the wild symbol by clicking on the Bet, Lock, and Spin button, but it will cost you a little bit more to do this. However, you can skip this feature and play in the regular version of the game.

This is a Betsoft software casino game that not only has wild symbols, but the scatter pizza symbol where you will have to spin at least 3 of them to start the free spin mode. You add ingredients to the pizza and the more you add the more free spins you will win. Last, but not least, there is the food critic bonus round, which you will trigger if you spin at least 3 of the menu symbols. You try to impress the critic in making the right dish and the higher your score is for that dish the better your cash payout will be.