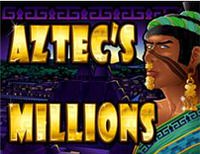 Aztec's Millions online slots game is designed RTG casino software developers and they present a unique slots game experience with five reels and 25-paylines, a wild, scatter, multiplier and a multi-million dollar progressive jackpot. Leave it up to RTG, which is one of the best-known and well-respected companies in the business of software for online casinos, to turn out an online slots game that is great to look at and has the ability to be very, very good to you.

Those Aztecs were some of the most advanced people of their age, and this game has something in common with that, offering the chance for outstanding payouts in a number of different ways. Creating the atmosphere to bring that period to life was a great coup for the designers at RTG, with great graphics and color, but this game is not all about sizzle. There's substance here; in fact, some of the best features you're likely to find in a slot game, and where you'll find this in its most spectacular form is with the progressive jackpot.

The betting in this game is somewhat static, in that your wager is essentially frozen at $5, which means it is 0.20 per line, with all 25 paylines enabled at all times. You are always eligible for the big prize. The progressive jackpot for this casino game really justifies the name Aztec's Millions. The jackpots are mindblowing; in fact, they pay off in the seven figures on a regular basis. You can win it, but only if you spin the golden combination, which for Aztec's Millions jackpot happens to be five Aztec's Millions Logos on one of the paylines.

There are a number of other symbols in this online slots game, and they include: the Necklace, the Treasure, and also the Ace, King, Queen, Jack, Ten (10) and Nine (9), and of course the value of their payouts is in descending order.

Normally we would say that these combinations have to appear on an enabled payline to pay off, but as has been mentioned, all the paylines are enabled, so there's nothing else to think about.

As mentioned, this RTG online casino game features both a wild and a scatter. The Aztec King is the wild symbol, which appears on reels two, three and four, and it is used as a substitute for other symbols to complete winning combinations. The Idol is the scatter, and it comes in very handy, because it has the ability to multiply your bet in a way that impress you, for sure. Pull up three scatters, anywhere on the five reels, and your bet is multiplied by three. Four scatters multiplies your wager by 15. The biggest payout takes place when you get five, because then your bet is multiplied by a hundred. That would make for a $500 payout, based on the fixed bet of $5.

Getting the right number of scatters can also produce free spins for you in Aztec's Millions progressive jackpot. In fact, if you are able to pull up five Idols anywhere on the five reels, you've got 25 free spins, so you can take a shot at the house without any risk. Even better, when you get the free spins, any win during that time is tripled. Then, in the event you're able to get more scatters, you'll get more free spins - simple as that.

Don't even wait for those millions - go right after them with RTGs Aztecs Millions progressive jackpot slots game.