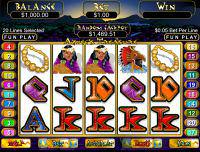 Head back to the ancient time of the Aztecs by playing RTG's Aztec's Treasure 5-reel 20-payline slots game. The game is an exciting, and possibly lucrative one, and since it is an RTG game the sounds, graphics, and player security are fantastic. Bet between 1 cent and $5 when playing Aztec's Treasure at RTG casinos and there are not only wild and scatter symbols, but a free spins bonus game and progressive jackpot as well!