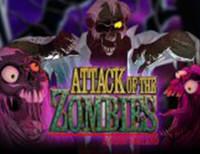 Attack of the Zombies Casino Game
Play for real
Fullscreen