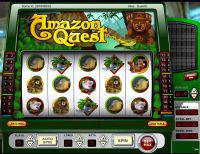 This game has a bonus feature game, which can be reached at certain levels. Bonuses can make a game exciting therefore it's a positive feature. The game also has an auto play feature, where you can make the game spin automatically for a set amounts of spins. For example you can set it to spin ten times and it will do so automatically.