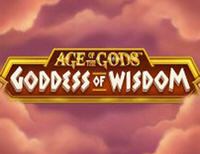 Age Of The Gods: Goddess of Wisdom Casino Game
Play for real Play for free
Fullscreen