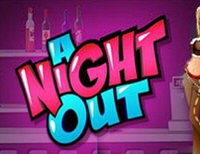 A Night Out is just what it says it is, having a good time while playing a five reel, twenty line online slots game. It offers a top prize of 10 000 and is also linked to the Dollar Ball lottery game.

Coins in A Night Out, range from 0.01 to 5.00, with ten coins placed on each winning line, and spin five wild symbols on a pay line, you could take the top prize. The wild symbols to look out for are matching beers. The dancing girl scatter symbols allow you to win from the stake you have wagered as these are the multipliers, and the Barman allows you entrance into the bonus round.

A Night Out has a very worthwhile jackpot, winning this could finance all your nights out for a while. The game is themed on a good night out at a club, and features attractive girls as well as cocky barmen. The animations are good, and make you feel right at home in the venue. Sounds that accompany this game are quirky and fun, while wild cards and scatter icons abound, allowing you ample opportunity to win. Icons like the beer symbol can turn losing hands into winning ones, and you could be in for a reel treat if you manage to guess all the right numbers in the Dollar Ball lottery.

If you only guess some of these numbers you still don't come away empty handed as the prize is paid out pro-rata. This fun and exciting game is another one of Playtech's creations, and once again they have produced a game that is entertainment personified.

The Cocktail Barman, will allow you entrance the A Nigh Out bonus feature, all you have to do to get entry into this is find him on reel one and five. The bonus feature is highly lucrative and once there select one of the ladies, she will determine what your multiplier will be, so hopefully one of them turns out to be your Lady Luck and you win big. Free spins in A Night Out make your game much more worthwhile.