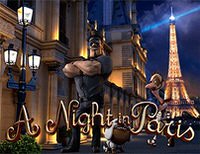 Head to the City if Lights playing A Night in Paris online slots where you are in a museum and follow the adventures of Jacques the thief, as he tries to evade Jerome the security guard and his guard dog Pierre. The A Night in Paris slot machine has 5-reels and 30-paylines where the top jackpot you can win is 7,500 coins. The betting denominations in A Night in Paris online slots range from 2 cents to $1 and while there is no wild symbol or bonus game there are free spins you can win as well as 3 unique bonus features. The sounds and graphics are superb and player security is top-notch and you can be sure of these things since BetSoft powers the game.

Some of the symbols in the A Night in Paris slot machine include works or art, the thief, a police badge, Jerome, Pierre, and, obviously, the Eiffel Tower. Any time you get a winning combination the symbols will animate so you know right away when you get a payout. There are 3 bonus features and the free spins are awarded when you hit on 3 or more of the police badge symbols. In all of the bonus features you will see the thief being chased by Jerome and Pierre through the museum.

To trigger the A Night in Paris online slots multiplier feature you will need to spin the thief, police shield, and security guard symbols and the win will be multiplied by your bet for the spin. The 3rd bonus feature is the "caught in the museum" that will begin when you hit on 3 or more of the Napoleon symbols.

When you do hit on 3 of them an animated sequence will start and you will try to catch the thief and if you are successful you will win a nice payout.